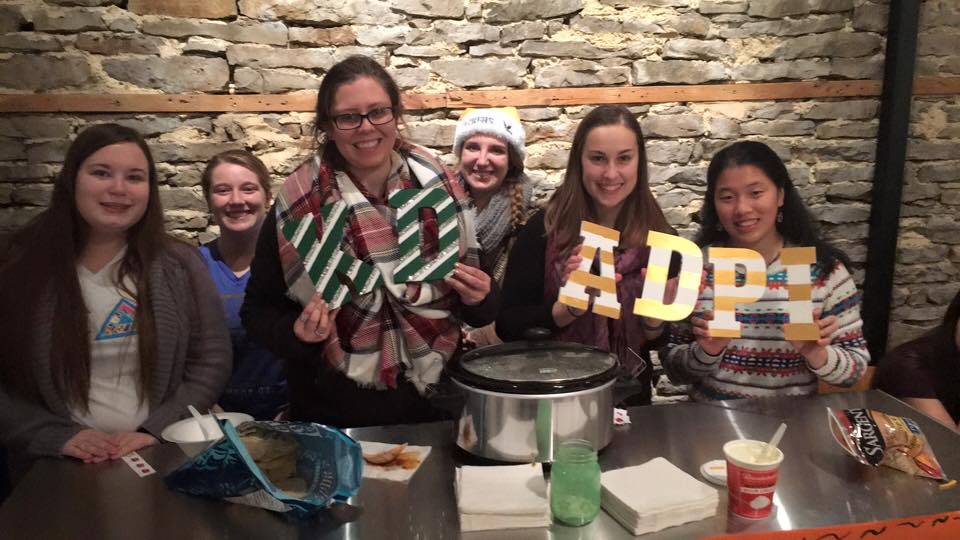 Alpha Delta Pi and Kappa Delta worked together to clench the win for the chili cook-off.

Members of Greek life hosted a chili cook-off at the 314 Project Space on Dec. 4 during the city of Ripon’s Dickens of a Christmas event.

The cook off involved all eight Greek houses on the Ripon College campus, randomly paired to create four separate groups.  Each group was in charge of making a competition chili to be sampled and voted on by attendees.  Guests were charged $5 at the door to try four varieties of chili. All proceeds went to support the Ripon Food Pantry.

The idea for the chili-cook came from Greek Council Philanthropy Chairwoman RaeAnn Brixius. “It is something that my hometown does,” says Brixius. “A Rib cook-off.  All the businesses participate and the ribs are sold by the plate.  The proceeds are used for funding scholarships. I just stole the idea and made it more wintery.”

Brixius points out that the good relationship between the college and the Ripon community will help raise more funds because people are more willing to give when proceeds are going back to the local community. “We’ve never raised too much money. Always a couple hundred dollars,” explains Brixius.  “There are definitely ways to raise more, and we have always used the college community and not the Ripon community.  I think we just get so focused on the college community and forget that [Ripon residents] are there for us to utilize.”

“With a smaller college such as Ripon College, they recognized that continuing to try to pull money out of a smaller population will only stretch so far,” adds Greek Life Advisor Tyler Volkert. “Each group has raised a substantial amount of money for their philanthropies, but it has definitely made them aware of the importance of working together as a community to not over program each other and the college community at large.”

Greek life leaders are hoping to build off this successful chili cook-off and continue to strengthen bonds with the city of Ripon. “The community could be a good focus for fundraising as long as we have successful ways to spread news of the event throughout the community,” says the newly-elected president of Phi Delta Theta Kenneth Hurley. “These events will help gain a relationship with the community and will give Greek life a positive appearance in the community.”

“While Ripon and Ripon College can survive without fraternities or sororities, we cannot survive without them,” states Volkert. “Giving back to the local community reminds us that we are nothing without a body that will foster us to grow and prosper. Giving back shows a level of respect for the space to do such.”