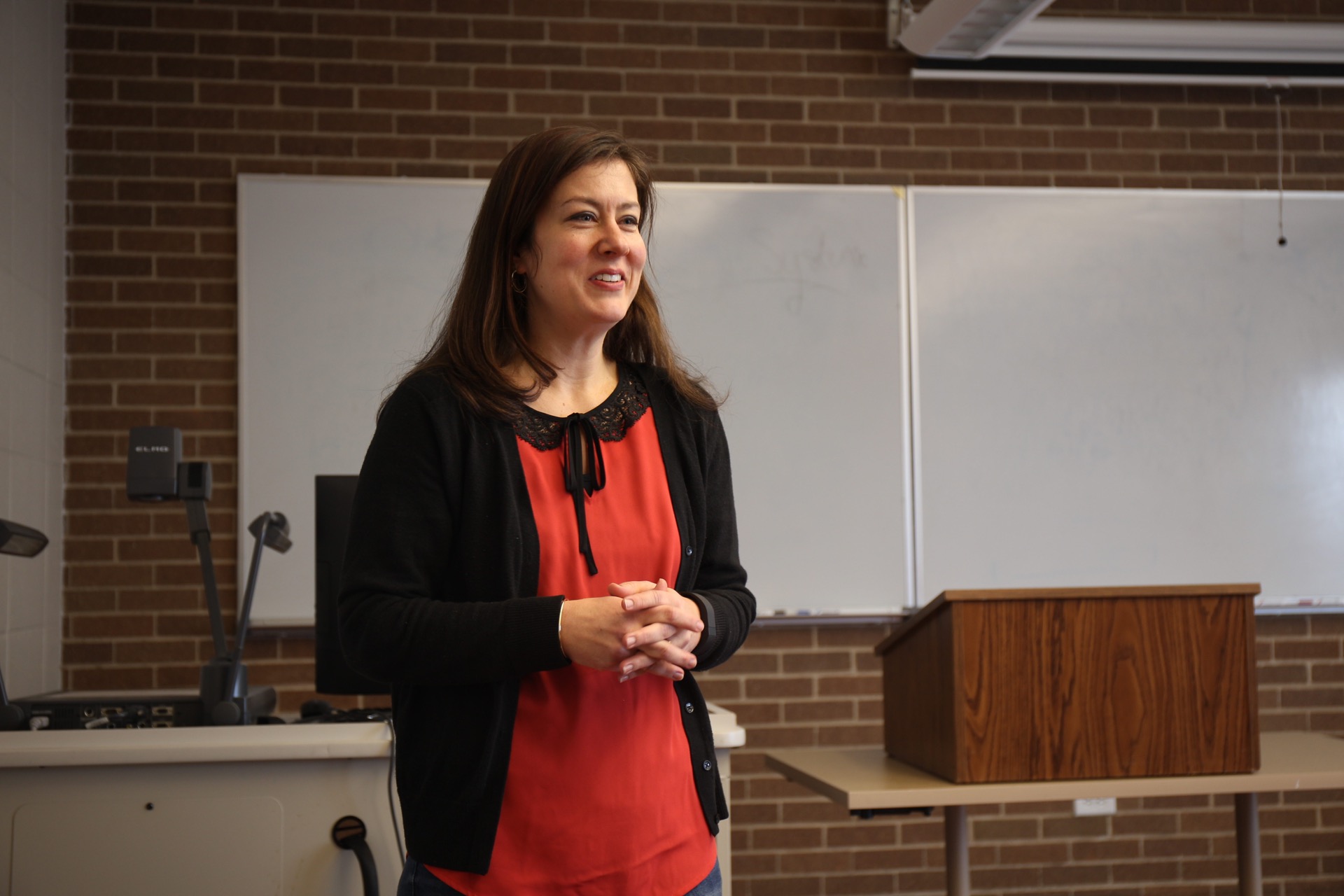 The career path of Lindsay Blumer, Ripon College’s newly appointed assistant dean of Career and Professional Development, can be described in a single word: diverse. Having grown up in Oconomowoc, Wis. to parents who were teachers, Blumer had always been interested in policy and the ways that it could affect others.

However, upon completing her undergraduate studies at UW-Madison, Blumer quickly learned that she would need much more marketing and public relations experience if she was to reach her goal. She worked on a marketing campaign for a casino, and in the process discovered that not all experiences are made equally.

“I was basically trying to convince people to gamble their life savings away, and do it in really covert ways, and that made me uncomfortable. At the same time, I was able to work at a startup nonprofit and doing their marketing, and I fell in love with it. I was doing something that mattered.”

She worked for was Safe Space for Newborns, a nonprofit organization formed to do the advocacy work for a recently passed policy. This policy allows new mothers to enter an emergency department or hospital and give up their baby within three days of the baby’s birth, no questions asked.

“The thing that was interesting about this policy was that it was supported by all sides. There were not a whole lot of negatives about it. It interested me because it had such a wide support base.”

Armed with this experience, she set her sights on moving to the nation’s capital, Washington, D.C. Before that could happen, UW-Madison rolled out a new master’s degree program in public policy, public affairs, and nonprofit management. It did not take Blumer long to recognize this opportunity. Blumer said, “I kept reminding myself, this is such a good idea.”

The program proved extremely valuable by providing the skills and context necessary to operate within policy and nonprofit realms. Blumer learned a great deal about public administration, government and representation, and the history of policy making in America. On the nonprofit management side, she was fascinated by how nonprofits are so influenced by the policies set forth by government. She also came to realize just how misinformed the average citizen was with respect to how institutions work together to bring about meaningful change.

“People see nonprofits as charities, government as bureaucracy, and business as profit. In reality, if you pull back that curtain of how things actually get done, it takes all three of those working together in really bizarre ways to make policy happen.”

Upon completion, Blumer accepted a position in D.C. with United Way of America. She became a United Way Fellow and travelled the country teaching their offices the ins and outs of impacts measurements.

After studying policy, its implementation, and its consequences, Blumer thought that these were legitimate questions to ask. While the process of teaching United Way offices impacts measurements was difficult, her efforts proved extremely effective. Knowing it was time to leave DC, Blumer moved to the United Way in the Twin Cities, which had just undergone a merger between the Minneapolis and Saint Paul offices. Blumer wore many hats: learning about mergers and acquisitions through a nonprofit lense, reviewing whether their partner organizations were held accountable to donors and community members, and doing a lot of work with domestic violence and sexual assault prevention organizations.

A position to run the Ethical Leadership Program opened up at Ripon College, and Blumer did not hesitate to pursue getting involved. She was attracted to the applied ethics inherently involved with ethical leadership. As the position has morphed throughout the years, she has been able to utilize more of the skills she developed throughout her career.

As the new assistant dean for Career and Professional Development, Blumer’s role is to translate her experiences and prepare students for life after Ripon When asked how she plans on getting students to care about their future prospects, especially when they seem so distant in the future, Blumer replies:

“I have a lot of support from the Dean of Faculty. The faculty did a really good job of digging deep into what makes Ripon unique, and what would be a curriculum that really showcases the skills necessary to be successful in the work world. It also happens to mirror what a liberal arts education looks like. Those two ideas of being successful post-Ripon and having a solid liberal arts education are not dissonant.”

Coming this spring, Blumer will make appearances in every Catalyst course, speaking with every single first year student. “I don’t go into a first year Catalyst class and say, ‘let’s work on that resume!’ because that is not relevant to a first year. But what is relevant is, ‘Who am I?’ That is the basis for career and professional development.”

Students will see her again their sophomore year where she will take time to explore the various skills that students are learning: writing well, working with numbers, working with other people, being a good team player and a leader no matter where you are. As juniors, Blumer will work to introduce internships, translating the skills learned in the classroom into an experience. Finally, after three years of working with Blumer, seniors will work with her on the nuts and bolts of their development following graduation, including crafting resumes applying for jobs and graduate schools, and doing mock interviews.

Blumer says, “We’ve talked about all the way from who you are, what skills you have, how you can apply them in some type of experiential way, how do you put it to paper, and then how you talk about that experience with a graduate school or an employer.”

She stresses that students must be cognizant of the fact that their first opportunity directly out of Ripon may not be the most glamorous or prestigious or fun, saying, “All of us at some point will have a position, a job, a task we do not like. It will happen. If it doesn’t happen, I want to meet that one person. But there is something to be said for career capital. Sometimes you do things to get the experience or to figure out that you don’t like it. You have to start somewhere.”

Blumer reflects over the course of her own career and acknowledges that there were many unexpected twists However, there was no such thing as failure. “I think it’s more, ‘Okay, I did this. I don’t like it, so I’m going to find something else.’ As evidenced by my own career path, it happened to me. Fairly random, fairly crazy. And I think that’s how most people’s stories go.”

Blumer’s role is to assist students in any way she can prepare for their professional endeavors during and after Ripon. Given the sheer diversity of her career, she has many skills available to help students. Furthermore, she knows better than most just how random one’s professional life can be. Considering her experiences, while she may not have anticipated ever being in this role, it is one she enjoys immensely. When asked what keeps her in this position, she responded, “I don’t think that it would come as a surprise that it’s the daily interaction with students. It’s an environment where you get to share ideas and listen to people who have new ideas. This is a place where everything is relevant. It’s a privilege to be a part of that journey.”