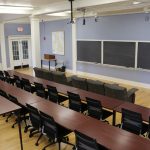 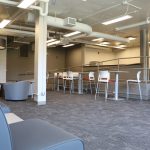 An email sent out to campus on Friday, July 21 from Vice President and Dean of Students Chris Ogle explained that this year would include changes unlike any other. Students returning in the fall will be welcomed home to an unrecognizable campus.

“This summer we are really excited to again be making updates to campus, ” said Melissa Anderson, vice president for marketing and communications. “The most significant of those updates is the opening of the Willmore Center in August. This is a long time in the making; we think it’s amazing and we are so excited for Ripon College students to experience the facility.”

While the opening of the Willmore Center may seem to be the most prevalent of the changes around campus, the administration has been hard at working updating the facilities over the summer.

“Similar to most years, painting and repairing student rooms and classrooms has been done, while unique to this fall were major renovations in the former bookstore space and pub area, in addition to completion of the $22 million-plus Willmore Center,” Ogle said.

Other updates to campus include matching light poles along Rodman walkway, a handicap-accessible ramp for the President’s house, new steps on the south side of Bartlett Hall, new entrance for Todd Wehr, rodent room in Todd Wehr lower level, new furniture in West 2 classroom and new lighting and furniture in various residence hall lounges.

Students also will be welcomed back to a brand new state-of-the-art career and professional development center, located in the lower level of S.N. Pickard Commons.

The new space will include a large conference room for group work, smaller rooms for Skype interviews and plenty of flexible collaborative work space. Anderson stated the reason for this space is partially due to the Catalyst curriculum. Professors emphasising collaboration in their curriculum can reserve the new center.

An even bigger change not many students have heard of is renovations to the Pub, now known as the Spot.

“We thought the pub never really had a name, and we needed to look like we were trying a little bit here,” says Anderson.” The college decided on the new name, the Spot, to pay tribute to an old popular bar that used to exist in the downtown. Anderson continues, “If you page through some of our magazines in the alumni section you will see them talking about all the memories they had [at the Spot]. We thought, well if the city is not going to bring back the Spot, we can bring it back to our campus.”
The new Spot will feature made-to-order versions of food that used to exist at the Pub. There will be more seating brought in to accommodate for the loss of the Terrace. Anderson adds that it’s important to have a place for athletes to go to after practice, since the Terrace used to be that place.

Both Ogle and Anderson agree it’s important to invest in the infrastructure on campus.
“The most important part of the admission process is for the student to come on campus and see where they will spend the next four years of their life,” Anderson said. “We want them to be excited and we hope that it holds true.”