This year’s incoming class is the largest since 2013 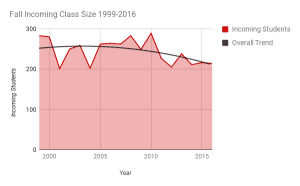 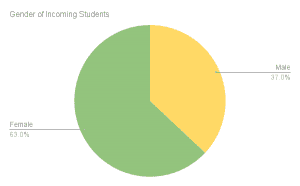 A new academic year means a new class of first-year Ripon College students. This August, the college is welcoming 238 new students into its student body, making the class of 2021 the largest group of incoming first-years since 2013.

The trend of smaller incoming class sizes is part of a recent drop in Ripon College’s overall student population. Between 2011 and 2017, the overall size of the student body went from about 1,000 students, a size where it had previously remained for a number of years, to 718 students during the spring 2017 semester. While student census information for the current semester will not become available until after Sept. 1, this semester’s incoming class outnumbers the 181 students who graduated last semester.

In addition to the 238 new first-years, Ripon College also is welcoming nine transfer students. This brings the total number of new students to 247. Out of this group, 63 percent of the students are female while 37 percent are male. The majority of new students come from within Wisconsin with 30 percent being out-of-state students. Nine of the new first-years are from outside the United States.

Sharon Jackson, director of student activities and orientation, said that she has been preparing this semester’s orientation committee to handle a larger class. She explained that during training she was “intentional about encouraging lots of facetime with new students because I don’t want them to feel like they’re getting lost in the shuffle because they’re in a bigger class.”

Jackson also anticipates that a larger incoming class might affect on-campus activities. “For student organizations it could mean the difference between ordering eight pizzas when you originally budgeted for five last year, between meeting in Joyce Lounge or MLK Lounge, or between holding multiple positions or having folks you can delegate tasks to,” she said. Jackson also said that the size of this year’s incoming class may affect how she determines what activities students will enjoy because “a larger class means more voices to consider.”