A discourse through posters 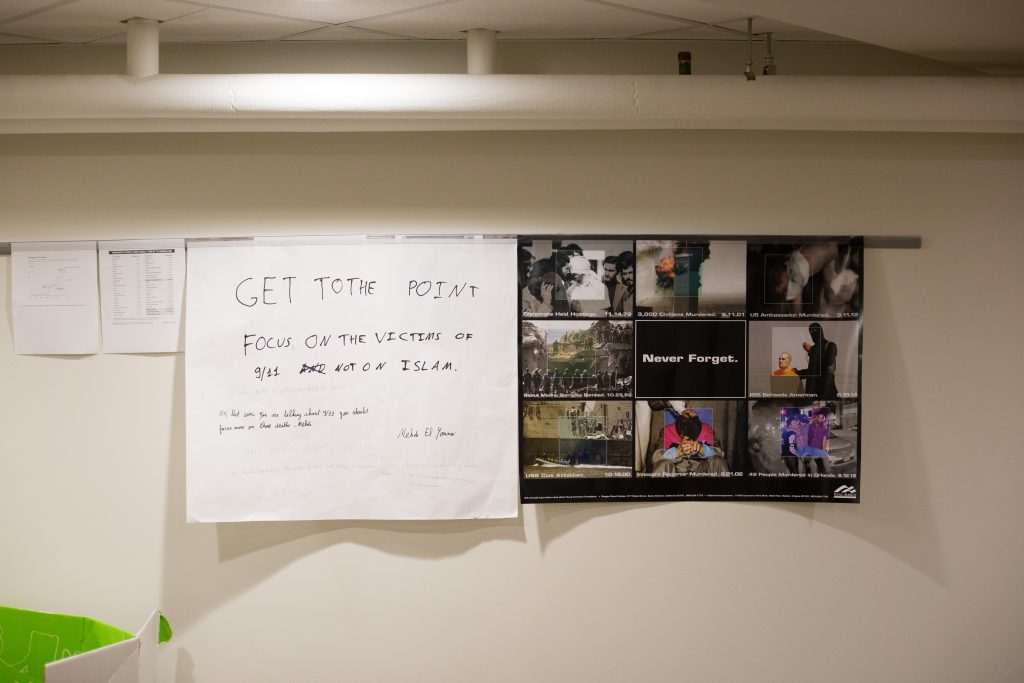 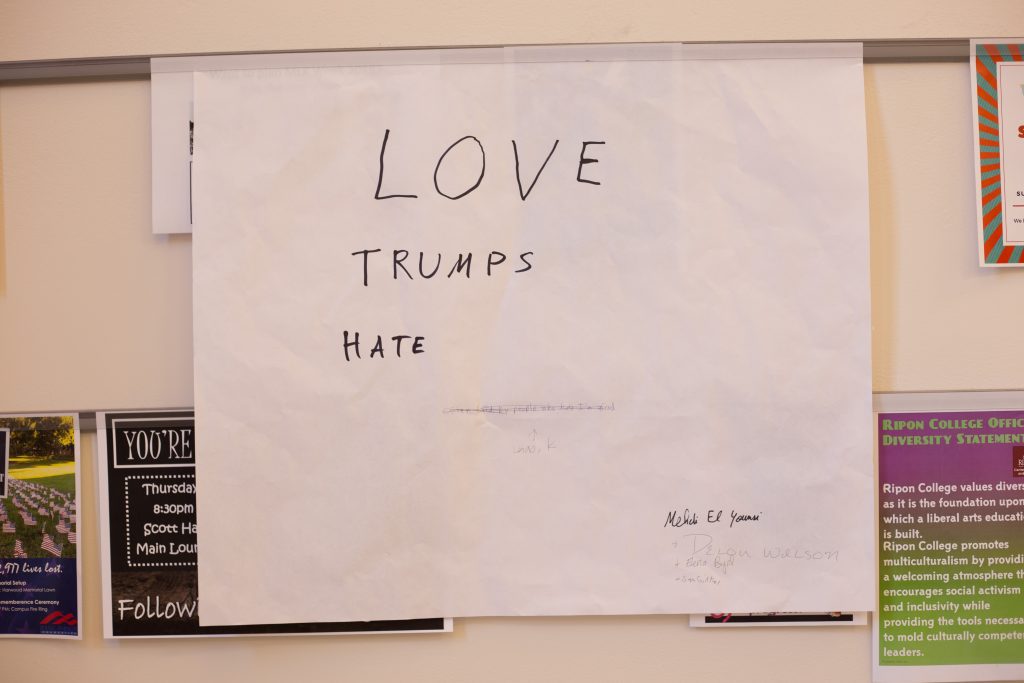 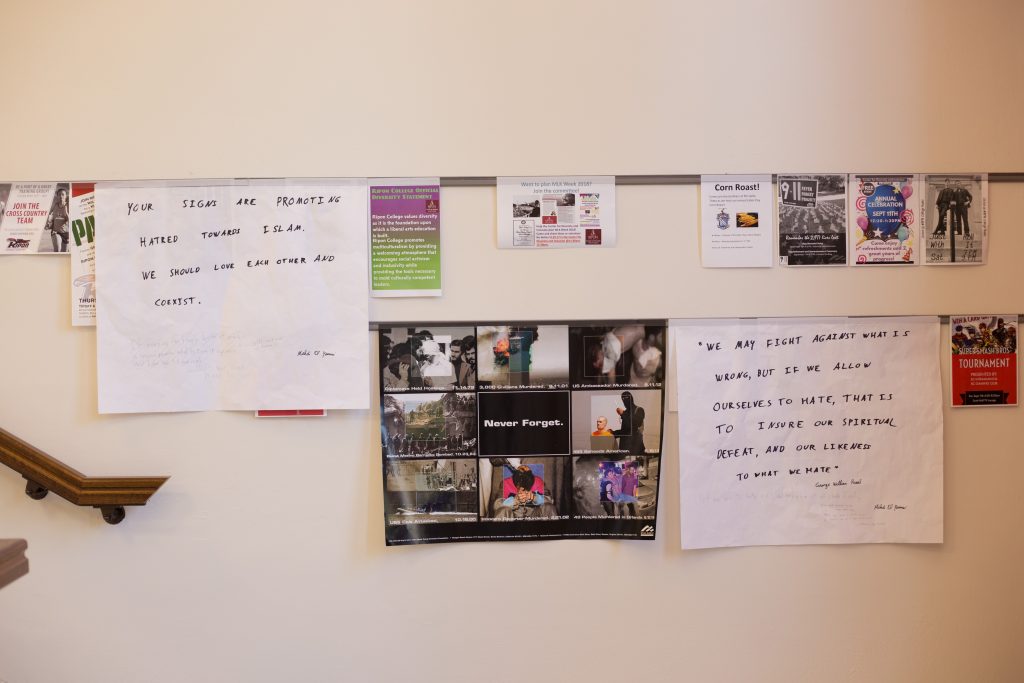 Fourteen posters in remembrance of terrorist attacks on 9/11 and other attacks were posted Tuesday, Sept. 5, by Young Americans for Freedom.

Due to the images in YAF’s posters depicting terrorist attacks by extremist Islamic groups, some students expressed feelings of anger and fear. One specific student, El Younsi Mehdi ‘20, responded by creating his own posters and putting them up alongside YAF’s.

With the posters, Mehdi and YAF have created a discourse about the messages behind the posters and what they represent, and with this open line of communication, both parties are currently working together to come to a compromise about the posters and a possible solution for next year.

Even so, Mehdi explained that he’s had similar concerns since his freshmen year when he first encountered similar posters.

“It all started freshman year, which was just last year,” Mehdi said. “I just arrived here and it was my first time living outside of Morocco. Two weeks in, I see these posters that have a lot of images that have terrorist attacks in them and all of them are linked to Islamic terrorism. The first impression that I got was, ‘OK, these guys are either trying to prove that Islam is the religion of terror or that all Muslims are terrorists.’ I was scared and I was [angry] about it, but there was nothing that I could do.”

This time Mehdi decided to speak up about his feelings, creating a discourse through the posters.

“This year, since I’m a sophomore, I saw those posters and I got really [angry] again and everyone was [angry], but there was a voice that wasn’t heard,” he said. “I figured out that since they [YAF] have their own posters maybe I can post my own posters, so I went to Sharon [Jackson] and asked for her approval and she gave it to me. I started having some quotes and some ideas, and some people helped me out with some of them.”

Meanwhile, students from YAF have responded that the posters aren’t intended to cast blame on any singular group or convey hatred.

Even though both parties are working on a compromise, one of the most important things for Mehdi was that students know through his posters that not all Muslims are terrorists.

Other students such as Mehdi have acted upon their concerns, approaching the Student Judiciary Board about YAF’s posters. The Judiciary Board decided to let YAF keep their posters up on the basis of freedom of speech.

According to YAF’s President Jacob Kramer, the posters that were sent to YAF from the national YAF organization were a part of the national “never forget” movement and were meant to remember the American victims of terrorist attacks.

“The purpose of the posters was remembrance,” Kramer said. “We wanted to make sure that people did not forget the Americans that lost their lives all across the globe. YAF wanted to send the message that these people are not forgotten. We understand that a lot of these attacks happened before we were alive, or when we were very young, but they have lasting impacts on a lot of students here, including myself. We wanted to highlight different times we have been attacked and just how many people have lost their lives.”

Kramer added the posters were never meant to convey hatred of any kind or cause any fear.

“I just want the students to know that we do not put these posters up with hatred in mind,” he said. “We put them up for remembrance. They are not meant to cast blame on a specific group or culture. They do not mention any group or culture for that specific reason. They are simply for us to remember those Americans that have lost their lives due to terrorism.”

Kramer, also, acknowledged Mehdi’s posters, and though he may not agree with them, he supports Mehdi’s use of his freedom of speech.

“I have seen Mehdi’s posters, and while I do not agree with the message, I think that it is awesome that he is utilizing his freedom of free speech to tell people how he feels. I am a big supporter of people saying what they feel; that’s what college is about. Having ideas and having them challenged. The fact that we are able to have, and are having this discussion is truly what free speech and debate is all about. I believe this experience will help both sides become better citizens, more able to convey their message and listen to what the other side has to offer.”

He noted that Mehdi approached YAF about possible changes to the posters and solutions on how to prevent this situation in the future.

“Mehdi approached me and made some suggestions as to how to move forward, and me and him are currently working together for next year to insure that this discourse that seems to be annual, can finally be a thing of the past,” Kramer said. “I have [sent] several emails and calls out to the leaders of YAF in Washington DC, in order to give them our feedback. We would like to see other terrorist attacks put on the poster, including the Oklahoma bombing. I thought that was a great idea. Those people need not be forgotten as well.”

Kramer, like Mehdi, noted that this is not the first time the poster issue has occurred.

“Every year [that] we have put them up there has been some sort of discourse. Hopefully with me and Mehdi actively trying to work together, we can move forward and in future years not have this issue,” he said.

While YAF and Mehdi are working toward a solution to resolve the issue, both parties have had their posters destroyed and defaced.

“We put up 14 posters around campus in the academic and dorm buildings. As of right now, at least half of them have been either torn, thrown away or stolen,” Kramer said.

Mehdi’s posters have experienced the same treatment and even had students write on them, vandalizing his posters.

The administration is aware of the situation and hopes that students reacquaint themselves with the poster policy in the student handbook to avoid any future poster issues and vandalism of posters as well.

“It’s my hope that people that are going to put up posters would make sure that they familiarize themselves with what the policy asks them and to remind everybody that there are procedures to follow if someone feels like someone violated the policy and that one of the responses should not be that students take it upon themselves to either take down or vandalize someone else’s poster. That is something that we absolutely need to avoid,” Ogle said.

When college policies are violated such as the posting policy or defacing posters, the Student Judiciary Board becomes involved and takes action.