Students and alumni respond to the vandalism
By Connor Renshaw

On Feb. 20, the Ripon College Black Student Union began putting up posters around campus that displayed the group’s logo in what they described as a “silent protest.” Then, on March 2, within weeks of the posters being put up, the group made a post on its Facebook page revealing that several of the posters had been vandalized, “ripped, thrown away, and put in toilets.”

Norris said she first found out about the vandalism via a Snapchat from fellow BSU member Jacob Pledl, class of ‘21.
“I was astonished,” Norris said. “They’re just posters; they don’t have anything on them except for ‘Black Student Union.’ To see that they had been vandalized, to see that they had been ripped, I was in shock. My second reaction to it was, ‘Good; let’s get this thing started.”

The post garnered various reactions from the Ripon College community with many people voicing their support for the group.
“You have many supporters, allies, and friends among the RC alumni community. (Perhaps many more than you know.),” read a comment by Josh Mason-Barkin on the Black Student Union’s post. “Please let us know if there are particular ways we can help.”
However, not all alumni were supportive of the Black Student Union. One comment left by Joellyn Jaeger read, “As an Alum, why can you all not be just Students? We were in the sixties. We did not identify as color or country, gay or straight, but as Ripon College Students. And we were all one.”
In addition to the Facebook post, the Black Student Union also responded to the vandalism by putting up more posters around campus, this time that read “Black Lives Matter.”
Norris said that this was meant to send a message that “if you’re going to take [the posters] down, we’re going to keep putting them up.”

Members of the Ripon College administration also have responded to the vandalism. Director of Residence Life Mark Nicklaus said “at this point in time, we are following up on where the full extent of the damage occurred and in what locations. We are asking if anyone knows of anything pertaining to the destruction or damage of the posters to please let Residence Life know either by contacting myself or a Hall Director.” 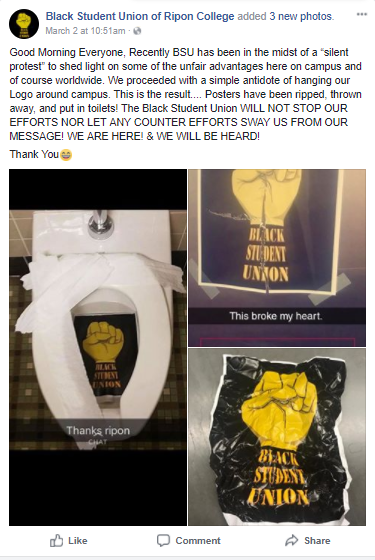