Drinking Culture Part III: Party School of the Past 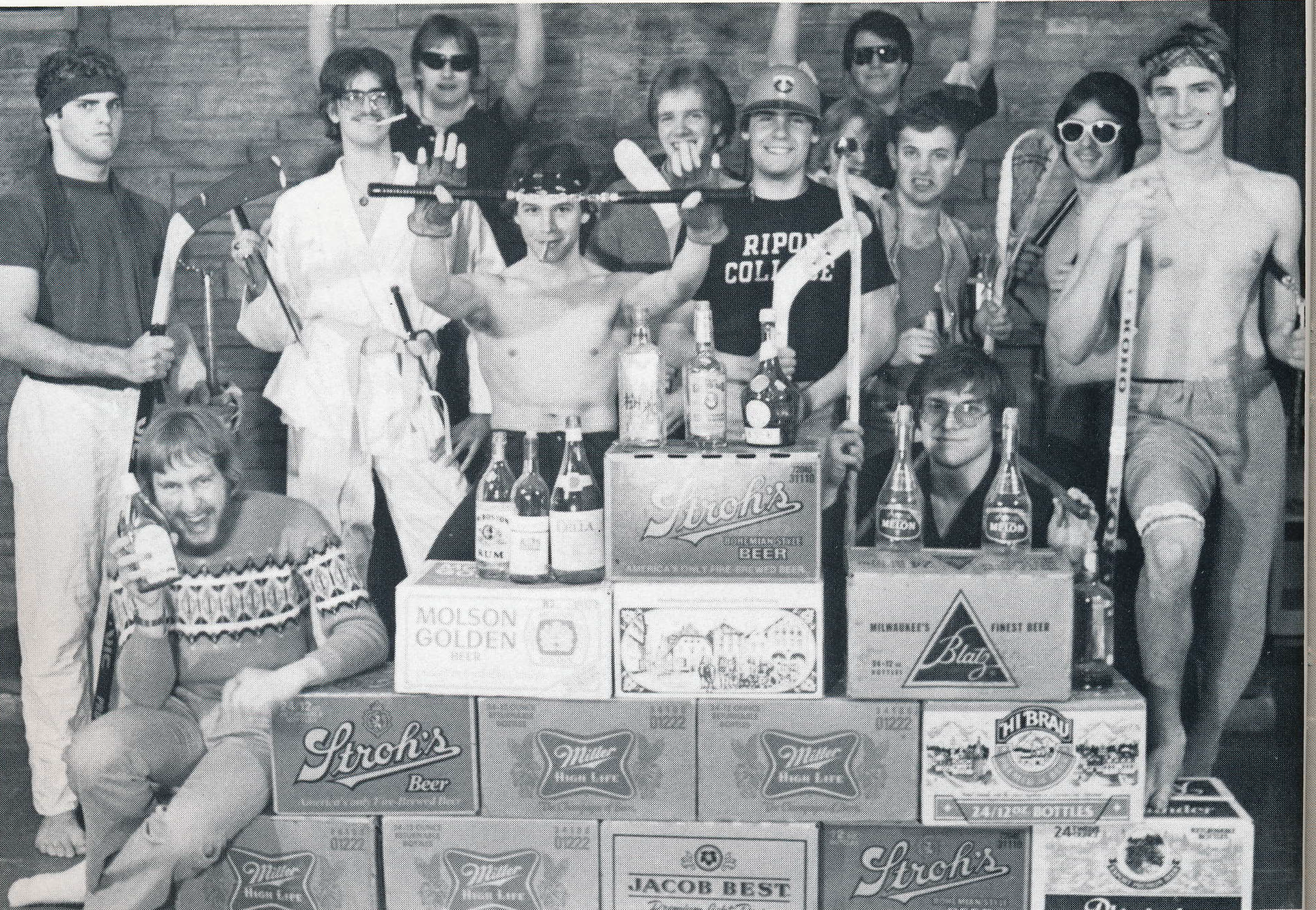 Someone looking through yearbooks from the 1980s might get a very different view of Ripon College than what they are used to today. Black-and-white photos of students posing with cases of beer and open mentions of drinking at school events aren’t hard to find in the yearbooks of the past. The photos seem to hint at the campus having been a completely different world back then, so what’s changed? And how different was it really?

Peter Lenz, a class of 1989 alumnus who began attending Ripon College in 1985, recalls parties open to the entire campus where alcohol was served. He described such parties being held in the Memorial Gymnasium, which used to occupy the field adjacent to the Pickard Commons, during which the school would “back a beer truck up behind the building.”

According to an article in the Milwaukee Journal Sentinel Wisconsin’s drinking age was originally 18, but in September of 1986, it rose to 21, two years after the passage of the National Minimum Drinking Age Law. Lenz says the change in the law also set off a change in the school’s culture. “Things started getting tighter and tighter,” he said. “Fewer people could drink until their senior year, so campus-wide parties with booze came to a grinding halt.”

Yearbooks from the time reflected the new law. The 1985 Crimson features a reprinting of a College Days article from that year titled “New Party Policy Enacted.” According to the article, in response to the upcoming change in the drinking age, Ripon College adopted a policy in which parties had to be contained within lounges and attendees I.D.s had to be checked.

The change didn’t stop students from drinking, Lenz says, but instead led to them drinking illegally. “Because [drinking] had to be surreptitious, people started becoming more concerned about not getting busted than in making sure others were okay,” he said. “All in all it was not a positive change.”

Ripon College did not adopt its emergency alcohol amnesty policy until the 2012-2013 academic year. Before the adoption of this policy, no guarantee was offered that a student who reported an emergency situation resulting from alcohol would not risk getting in trouble with administration.

Michael Heffron, class of 1993, recalls similar experiences, saying “I can only speak from personal experience, but I never felt any pressure to consume on campus.”

Packard also remembers feeling that the campus was a safe place to drink for students. He says “the majority of drinking and partying took place on campus and it was precisely because [students] felt it was a safe place for them to enjoy themselves.”

The perceptions of students from the late 1980s and early 1990s do differ from current student perceptions in one significant way. Students today report feeling that a lack of other activities, especially on weekends, contributes to how often drinking occurs at Ripon. Alumni however, remember the events and activities that were available while they attended Ripon.

“I would say that drinking definitely had its place at Ripon, but it certainly wasn’t the only game in town,” Packard said. “There were a lot of activities for students to participate in from theatrical productions to athletics.”

In November 2017, media outlets began reporting on a bill moving through the Wisconsin state legislature which would lower the state drinking age to 19. According to an article from USAToday the National Minimum Age Drinking Act, which made states’ federal highway funding contingent on the drinking age being 21, stands as major obstacle to the bill. If this bill were to pass and change Wisconsin’s drinking age, however, then Ripon College’s drinking culture might once again change with it.