Inside the life of Sharon Jackson 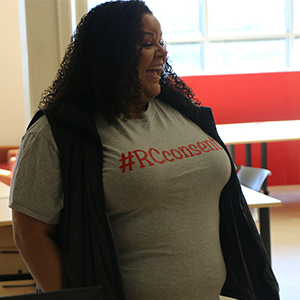 Ripon College’s Director of Student Activities and Orientation Sharon Jackson is probably somebody you have met, but there is a lot more to her than most students realize.
Jackson said she is “originally from New York/New Jersey, depending on the year and [her] attitude.” She then lived in Ohio for eight years and, after doing a national job search, she came across Ripon College. Jackson said what drew her to campus was, “ Campus is just stupid beautiful in the spring. It looks like a postcard, and that shouldn’t be a real thing. And so I thought, ‘this place is beautiful, I gotta come here.’”
Jackson said the most rewarding part of her job is, “I’ve only been here for a year and a half, but with the students that I interact with I’ve been able to see growth in them in my short time here. I’ve seen them develop, gain skill and kind of widen their horizons. And I mean, that’s why I’m in this field, so it’s been great.”
As for the most difficult part of her job, Jackson emphasized how much work it truly is. She said, “At other schools that I’ve worked at that are a little bit bigger, there’s like three or four full-time professionals doing everything I do… it takes a lot of time management and juggling and trying to just knock things out.”
To handle stress, Jackson tries to keep her work life and personal life balanced. To help with this, she said that she doesn’t have wifi or cable at home, and if a task can’t be done on her phone, it has to wait until the next morning. She also said that she gives her student workers the task of kicking her out of the office at 5 p.m. to make sure she goes home and gets the relaxation she needs to tackle the next day.
When she’s not at work, Jackson enjoys going to the dog park with her dog, Sir Winthrop, playing board games, watching movies and traveling to the East Coast to visit her family and her niece and nephew.
The person she admires the most, Jackson said, “Besides Mindy Kaling, because she’s my spirit animal, I would say my parents.” She credits them for her work ethic and appreciates them for always keeping her in check. Her favorite thing about them is the honest conversations they can have together. “I can be on the phone with my mom for 20 minutes and we will cover basically any topic on Jeopardy that you’ve ever had,” she said.
Jackson said something that most people don’t know about her is that that she was born without toenails and now only has nine. “The doctors told my parents that it’s common … but yeah, no toenails or fingernails, and they just grew,” she said.
She also explained how fascinating it can be to get pedicures. “Some paint it, some just look at me because they don’t want to approach the subject … I think my feet look weird when all 10 are painted because that’s not how my feet are supposed to look. There’s supposed to be a gap there,” she said.
Overall, Jackson is full of surprise, from head to toe.