Chaos at the Quad 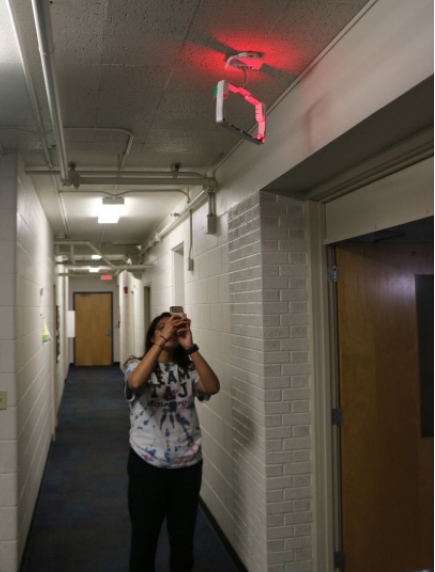 Almost every weekend this year some event has taken place in three of the Quad buildings which has threatened the safety of students. As a result, residence life has become more active in working to prevent them. Investigations have been conducted for each of these events since they occurred to determine how to further protect students.

During the first weekend of the year, the first incident occurred at Anderson Hall on a Saturday night.

“At Anderson Hall, a pole station (fire alarm) was triggered. We don’t know why the pole station was triggered. There was no actual fire at the time and no tips have come forth,” said Director of Residence Life Mark Nicklaus. This incident was not connected to any of the other incidents that occurred on the following weekends.

Mapes Hall, on the other hand, experienced the most intense event. This incident ended up extending to different areas on campus rather than just sticking to Mapes Hall.

“We were notified of a fire alarm going off in Mapes. Someone went to Mapes and saw that someone had used a fire extinguisher in the building. There was no fire residue present so we were suspicious that the activity was malicious at that point in time. This happened roughly 20 minutes before the alarm went off. The fire alarms are tripped by smoke and heat typically. Here, the sparks got into the system and clogged the fire alarms,” Nicklaus said.

This event at Mapes would only be the beginning for other situations which would occur across campus that night.

Due to these numerous incidents occurring on the same night and throughout much of campus, some of the safety equipment throughout went missing.

“We noticed at that point in time that there were at least four fire extinguishers missing. We recovered them and they were depleted. We later found out that a total of six were missing throughout the entirety of campus,” Nicklaus said.

The college has been investigating this incident for quite some time but they have also included outside sources in the investigation.

“That situation has police involvement as well as fire department involvement. It is fire equipment tampering and there are state laws and ordinances against doing that for health and safety reasons. Right now, we are still investigating this situation. We have some leads but there are some rumors on campus. Some of them are true and some are not. That is what we are investigating at this point in time,” Nicklaus said.

The most recent incident occurred at Brockway and resulted in residence life testing safety equipment in the Quad dorms.

“Long story short, humidity set the alarm off in Brockway. If there is any dust near the alarm, then you get excessive humidity which happens around this time of the year. People are being highly active and there is a large amount of people in a small space. This causes the humidity to build up which leads to dust clogging up in the sensor. The sensor then is tripped as a result. There was no fire, there was nothing that happened in terms of trying to set the alarm off. There was a bag over the sensor but the bag itself did not trip the alarm. The bag helped accumulate the humidity,” Nicklaus said.

Ripon College has taken steps to prevent these events from occurring as often as they have been in the fall 2019 semester. Nicklaus has stated that open communication with students is key so they know of the laws in place and also with following up on any leads that come forward. Nicklaus also explained that RAs are being more diligent with checking fire alarms and making sure there are no fire extinguishers missing during their rounds. Residence life also performed a fire alarm test in the Quads to ensure that nothing was experiencing malfunctions on their end.

It is complicated to prevent incidents like these from occurring at any time period. However, the college is doing their best to make sure that people know the reason for the fines that are in place for tampering with fire equipment and keeping cars parked in the Quad circle, to protect people for safety reasons, Nicklaus explained. Tampering with fire equipment results in a $500 minimum fine for individual tampering and also a minimum of disciplinary probation that lasts for the entirety of a students’ time left at Ripon College.

However, based on the information provided so far, Nicklaus also stated that he is anticipating students not involved will not have to pay common damage. The fire department is delayed when bringing trucks into the Quad circle if they need to get vehicles towed because they are parked by the buildings. The fire chief can have cars towed without a ticket if they are in the fire lanes.