Theatre in the time of Covid-19: One Acts Edition

Ripon College’s Theatre department made headway recently hosting auditions for One Acts performances. Cast lists went out the morning of Thursday, March 25, and directors have begun scheduling rehearsals with their actors. This is more than can be said of last year’s One Acts season—a season ultimately cancelled due to the rise of Covid-19.

Logan Zeinert, a junior studying psychobiology and theatre at Ripon College, shared his experiences, touching on some of his favorite parts of the theatre community. He said he admired “how close [everyone] is. There’s that stereotype, like [in] movies how the top-notch ones are so cutthroat and will do anything to be on top, like push you off a ladder so you break your leg. That was not the case, here.”

“Everybody is on a level playing field. Yes, there is that seniority aspect, but if you are a first-year and you’re coming in and you really show you have what it takes, you could potentially be [in] one of the main roles, [be] one of the players,” Zeinert said.

Katy Dano, a junior studying English, Spanish, and theatre, also commented on her relationship with the theatre community.

“Everyone is really just the biggest hype man in the world. I feel so loved and supported each time I walk in for rehearsals,” she said. “Everyone is a bit unique in their own way and I really enjoy that because people can bring different experiences and perspectives to each production. It’s just truly amazing.”

The Theatre community, like many other groups on campus, rely heavily on in-person meetings and communication, posing concerns as Covid-19 restrictions on campus makes this difficult.So, what happened to the Theatre community when a pandemic arrived on the world’s doorstep?

As The theatre does, they improvised and overcame.

“When we got the list of shows that the College was doing in the fall, they were structured so that it wasn’t too much character-on-character dialogue and interaction, but [instead] very monologue based,” Zeinert said.

He went on to discuss the experience of performing outdoor theatre for the show Spoon River, a play based on Edgar Lee Masters’ Spoon River Anthology. In this play, actors had the job of playing multiple personas, but without changes in costumes, blocking, and communication between characters to minimize the risk of potentially spreading Covid-19.

“For each of these [different] monologues, you had to really make bodily and mental changes to really let the audience know that these are separate characters,” he said. “Having the different actors alter between each character [was] a big thing that needed to happen. And that was something that everyone truly developed on their own.”

With the lack of in-person rehearsals and the plethora of Zoom time, the actors delved into their characters on their own. One Acts will be different in its production style.

Normally, One Acts are multiple, separate shows that seniors direct for their Senior Seminar credit. This year, the Ripon College Theatre department decided to showcase Almost, Maine, and divide the scenes amongst the seniors and a handful of juniors.

Almost, Maine is a play by John Cariani, made of nine short plays that explore love and loss in a remote, mythical town called Almost, Maine. The plays will be performed “more like reader’s theater, [where] you just have to be comfortable with your lines,” Zienert said.

“I think it is a lot more chill than previous years and puts less stress on actors to memorize,” Dano added. “It would have been nice, however, to perform my play in Benstead theatre. It is very frustrating to see how little we are able to do while sports are back in full funding and in full-swing.”

But the students of the Theatre community do not want anyone to get discouraged by this new way of performance. There is much to learn from all aspects of Theatre: the acting, directing, costuming, and crew all have something to give.

“Theatre has made me a lot more comfortable with myself, I suppose,” Zeinert said. “You have to be vulnerable on stage and really accept that these are emotions that people feel—emotions that you feel.”

“But otherwise, in a more tangible sense, I’ve definitely learned a lot of important life skills, like sewing and how to use tools,” he added.

Dano said, “Theatre has made me a much more confident person. My professor and advisor, Ken Hill, has really pushed me to be an overall better actress.  On stage, I know how to really become the character and connect with the audience. I would not be who I am today without theatre.”

Despite the limitations on programs and events at Ripon, Logan Zeinert and Katy Dano had advice they wanted to share for anyone interested in theatre but might be feeling hesitant to pursue it because of the pandemic and other concerns like job availability.

“Audition—even if you have the slightest inkling, or if you just want to have fun,” Zeinert said. “[As for job availability], there’s been a lot of innovation within the Theatre community and how to continue it [in Covid times], whether that being recorded and then streamed, or outdoor theater where you can safely have that distance between people and work through that way. Positions are opening up in those regards.”

“Everyone should take a theatre class! It teaches speaking and improvisation skills that are useful in any field,” Dano added. “I think anyone can pursue a job in theatre if they are willing to put the work in. However, times have changed.”

“My dream job would be to be a theatre critique, but when I talked to Professor Hill about possible job opportunities, he was very straightforward with me. Theatres have been shut down for a while and who knows when it will be back and running at full capacity. While I could pursue my job in a normal time, it just might be best to think of something else right now,” Dano said. “This isn’t to say that I shouldn’t pursue theatre, because he emphasized that I could, it’s just hard in this environment to be super successful in the time of [the pandemic].”

“[Hill] hopes things will get back to normal as well. Right now, I am planning to be a lawyer, but I hope as [soon as] things will improve, I will one day be able to pursue my dream job.”

With more and more students getting vaccinated, and room capacities changing, hopefully, by the fall semester, students will get to spend their time underneath the spotlight once more, but until then, the curtains are closed and the laptop cameras are on. 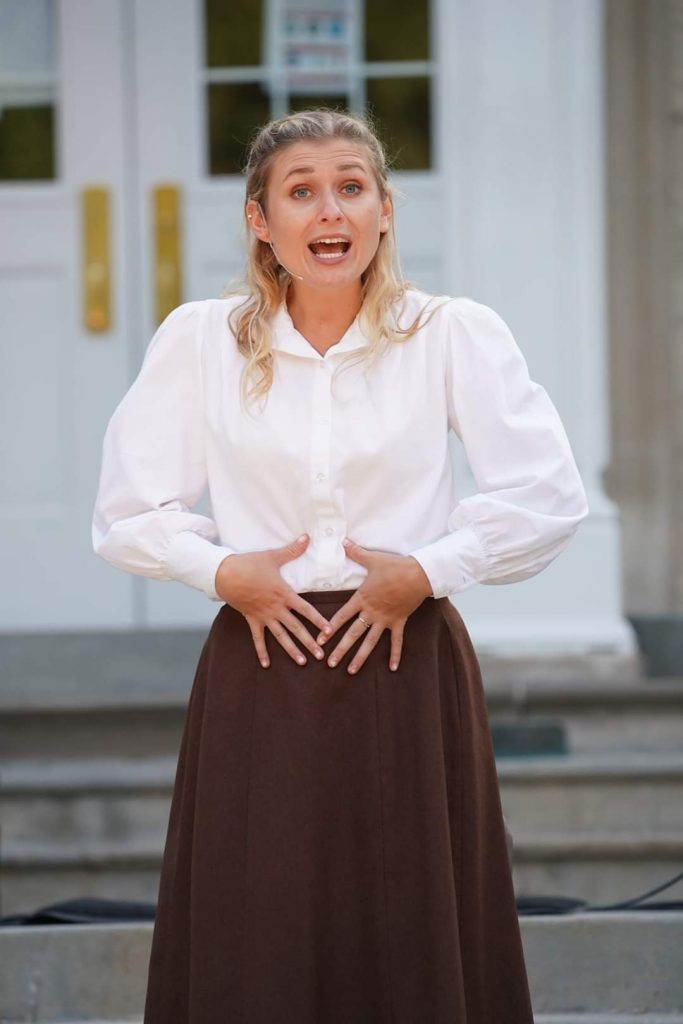