A legacy of alumni support

A legacy of alumni support

“I remember when I played, there were some older guys who came back from classes even 15 or 20 years ago … Obviously they had no idea who I was or, I didn’t know who they were, but they just kept coming back and staying connected with the program.”

Cal Schultz, class of 2019, a former Ripon Red Hawk on the men’s basketball team, reflected on his time as a member of the team and how much he appreciated the support from alumni from his time at Ripon.

“When I was playing, I looked up to all the guys who came back and thought that it was great to see them at the alumni game,” he said. “Just for the current guys to see all the older guys and all the love and support that there is from us, coming back every year, it’s so awesome. I mean, it meant something to me when I was playing, and I hope it means something to these guys when they see us.”

This past month was very special for the Ripon College men’s and women’s basketball teams as they held their annual “Alumni Weekend. on Saturday, Jan. 29.

Women’s basketball coach Lauren Busalacchi, said, “Alumni Weekend includes both the men’s and women’s alumni games in the morning, an alumni lunch, and then a gathering at Roadhouse after our men’s and women’s games at night with current players and their families as well as alumni.”

But that’s not even all of the day’s festivities. The alumni and other visitors also have a chance to share their support for the current teams and players throughout the day in another way, at a silent auction held as a fund-raiser for both teams.

Coming back to Alumni Day this year for Cal Schultz turned out to be an amazing time, but he took the time to reflect on how vitally important it is for alums to make it a point to stay connected to others after they graduate.

“We all kind of go home to our own spots after college is done,” Schultz said, “and you stay connected with your close teammates, but I mean, all these guys—some that I never played with—I talk with them, have a great time at Alumni Day, playing the game, and we always have a great time afterward.”

The atmosphere of the event was uniquely special this year, however, as for many of the young alums, it was one of their first times attending. With all the energy and excitement after a lull from the Covid-19 pandemic, alums from both teams enjoyed seeing old teammates, friends, and even fostering new connections throughout the entire day’s events.

Another alum, Jordan Stiede, class of 2017, mentioned how exciting it was to have another taste of competition in the alumni game.

“It was my first time playing in the Alumni Match, ever,” he said, and was sure to point out that “We won by about 20 points, so you could say that our team was better. The Red Team was better!”

All of the stories shared, much like Schultz’s and Stiede’s, echoed the same sentiments of team environment, alumni camaraderie, and the importance of teamwork and staying connected.

Kristin Hereid, 1990 alum and assistant coach alongside Julie Johnson for 14 years, was also in attendance at the women’s game later on in the day.

“There are things that you learn on the basketball court, or the football field, or whatever, that you don’t get in the classroom, no doubt,” Hereid said.

She added that she still feels a strong connection to Ripon and the basketball program.

“You know, connection is a two-way street. You kind of need to show up and come on Alumni Day and support the team,” she said.

To current student-athletes on campus, Hereid wanted to encourage students saying, “Always work hard. Play as a team. Just remember you’re representing yourself, your team, your school, your family, and don’t take a minute for granted because it goes by really quickly.” 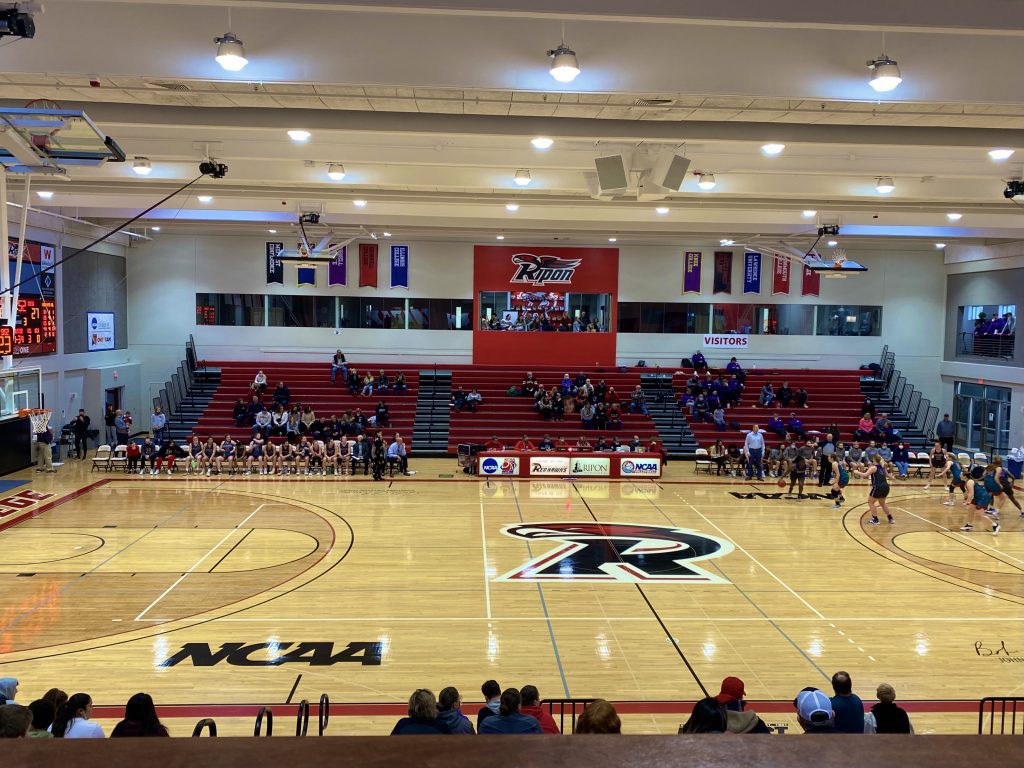