Kickball fundraiser brings students out after the cold winter months

The Ripon campus chapter of Phi Delta Theta hosted its annual kickball tournament in support of their philanthropy on February 19th 2022. The proceeds Went toward ALS, otherwise referred to as Lou Gehrig’s Disease research.

Senior Riley Pella, who was the organizer of the event, had a front-row seat on how the tournament went overall and was very pleased with how the event unfolded overall.

“I feel that everyone had a really good time. When the tournament initially starts up, people are usually just having fun. As it gets near the end, everyone begins to get more and more competitive, especially when you know some people on the other team,” Pella said.

This same sentiment was shared by participants.

“As usual, it was a fun event, and the Phi Delts always do a good job of making it a good experience for everyone,” Alpha Chi Omega senior Keara Duffy said.

“The only issue that there ever is, is getting in contact with all of the people of the other teams, and reminding them to return their team sheets. This is just so that we can put together the bracket for everyone, so there’s no confusion when it comes time to play,” Pella said.

This is an issue because the tournament had teams ranging from all across campus, including teams made up of friend groups, Greek Life, and athletes.

Hunter Thompson, a junior on the baseball team, played on a team of baseball players called “The Island of Misfit Boys and we ended up playing a Merriman team and both Phi Delt teams” Thompson explained.

Having all these different teams really created a great atmosphere and that created “the best part of the tournament was having different organizations and teams from Ripon College support ALS and have fun competing against each other,” senior Phi Delta Theta member Matt Johnson said.

Not only was the campus coming together a highlight but one of the most unique things about the day was playing in the elements outside.

“Playing with pillows as bases was super fun because you could slide into them. The ice also had another factor to the games because people were sliding all over the place which made it funny,” freshman Eli DiCarlo said.

The combination of the competition and the elements made the games successful overall “as they always are. People are always laughing when they’re slipping around on the ice. When it gets farther into the tournament, you see the teams actually really start trying because they always want to one-up their friends on the other team,” Pella said.

At the end of the day the baseball team won all four games and were the Grand Champions of the tournament along with that over $400 dollars were raised for ALS research. 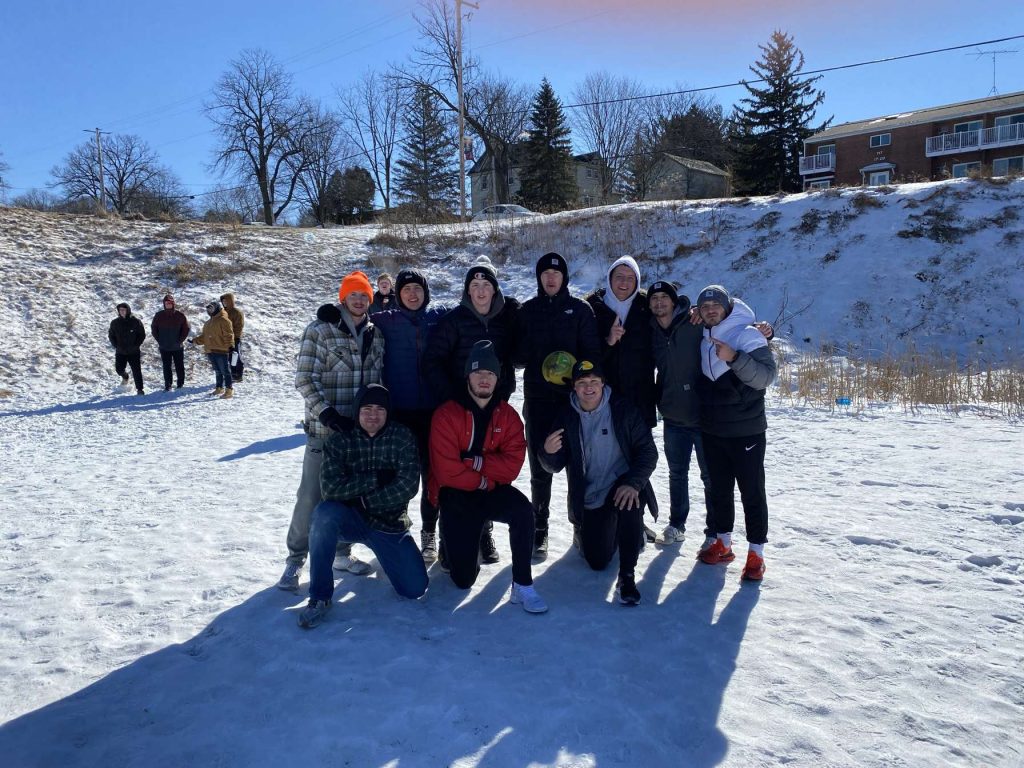